The cauldron of oil called the Middle East is aflame with the passions of the oppressed and dispossessed, of fear and intolerance, of hopelessness and hope. Every day we listen to and watch the latest dispatches, ticked off like reports of the weather along the path of an advancing firestorm: Tunisia, Libya, Egypt, Saudi Arabia, Bahrain, Yemen, Gaza, Israel, Jordan, Syria – and spreading eastward to add fuel to and join the ongoing fires in Iraq, Iran, Afghanistan, Pakistan. People, the grassroots, are waking up and letting it be known that they are “mad as hell and not going to take it anymore.”


And then there are the earthquakes, tsunamis, tornadoes, prairie fires, volcanic eruptions, floods, oil spills, and mine cave-ins: Haiti, Chile, Japan, Indonesia, Australia, Texas, Missouri, North Carolina, Gulf of Mexico, and more. Earth is waking up, too, and letting it be known that she is not amused. 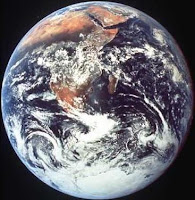 The image that keeps coming to my mind is that of Earth as seen from space in that famous portrait taken almost 40 years ago by the Apollo 17 astronauts. The focus of this photo is Africa, the birthplace of Earth’s most precocious progeny to date, the human, who descended from their hominid forebears over two million years ago. Scientists estimate that Earth, on the order of 4.5 billion years old, is about midway through her own life.  Putting those 4.5 billion years on the scale of a 45-year-old, mid-life human, it’s been about 8 days since our genus homo first appeared. In that week and a day of life, we, the infant human species, have multiplied ourselves to nearly seven billion individuals, dominated Earth, drained her of energy and resources, and committed fratricide against our own and sibling species.

At the top edge of that same portrait, a corner of Earth appears that we humans have come to call the Middle East, cradle of Western Civilization and three of its great religions. It is a region where, over the centuries, we have been particularly adept at exploiting Earth’s resources, presumptuously staking private claim to the gifts that Earth has given us all to share. We have also in this region (as elsewhere) been particularly intent on oppressing and killing our brothers and sisters.

The picture is most notable, though, for what are not there – lines in the sand!  But we humans insist on drawing lines to demarcate territory and property. Imaginary lines in the sand – is that what we are fighting and killing over? We imagined lines into existence; certainly we can imagine them away.

Perhaps this place where East meets West and the West was born can be the place where we humans boldly pass into adulthood, as we must if we are to survive as a species. It is time to leave our infancy. It is time to leave the make-believe behind – everything from private ownership of Earth to the nation state (which, in the eight-day time scale of homo on Earth, we invented less than 20 seconds ago). It is time to grow up and know that we are one humanity and an integral part of one Earth, and to take our responsible place in it.
Posted by Mike (The Green Pen) at 5:47 PM