Rays of the Dawn

I have written before about this time of great, evolutionary transformation that we are in as a species, as a planet. As I wrote last July:


“It is truly an epochal time in human history …. Some people despair that the world is just as violent and venal as in the ‘60s when the dawn of the new age was heralded, and, for sure, the dark will not yield (is not yielding) willingly to the light. But the sun is coming; it is inexorable. … [I]f we climb up to the top of the hill and look real carefully out across the plain, we can just barely see the first rays peeping out ….” 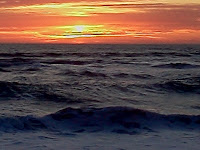 As the old saw says, “Red sky at morning, sailor take warning.” Indeed, all is not smooth sailing. All too often, those rays are obscured by storm clouds and the morning sky is bloody red. The news is full of examples every day – from Capitol Hill to Syria, from Afghanistan to a nondescript house of horrors in Cleveland, from a bombing in Boston to carbon dioxide levels in the atmosphere unprecedented in human history.

Still, behind the storm clouds of fear and resistance, and increasingly peeking through unobscured, the rays of the dawn persist in rising over the horizon. Dark secrets and customs of oppression and repression are increasingly being brought to light and thoroughly aired, as they must for healing and reconciliation.

A couple of ray-of-the-dawn examples I’ve written about recently:

And here are a couple more from just earlier this week:

Is there more that unites us than divides us?

Carl Gibson in the Huffington Post argues that “it is time to abolish Left vs. Right” and that “Americans of all ideological leanings are united in the belief that our current government, as it stands, is completely out of touch and needs radical change from outside the political system to do it.”

Farfetched? Perhaps. One man’s personal opinion? Definitely, though one that is shared by many others. It is also a point of view that suggests that there is more in this country that unites us than divides us – and that, to the degree that this is some truth in Gibson’s assessment, there is a way out of the darkness.

The ray-of-the-dawn point is that, as the age-old truism says, “United we stand, divided we fall,” and once we understand what, or who, is doing the dividing, we don’t have to stand for being divided.

Is being wedded to our cars a lasting marriage?

Emily Badger reports in The Atlantic Cities on government data showing that since about 2004 total vehicle miles traveled in this country has leveled off, reversing a consistent, decades-long climb, and that it has even begun a steady decline on a per capita basis.

Studies she cites forecast various future scenarios that suggest that Americans’ love affair with their cars may be cooling off, particularly among the Millennial Generation who are developing and expressing their own lifestyle patterns of living, working, and playing, patterns that don’t rely as much on the automobile as did those of their Boomer parents.

This unexpected development raises the prospect that perhaps we don’t have to plan on spending as much money on highway expansion to accommodate a growing population’s insatiable appetite for vehicle-miles, that perhaps that appetite has at last been sated.

The ray-of-the-dawn point here is that “the times they are a-changin’.” Fast. We can’t assume that the future will be at all like the past. In fact, we are likely to be more on the mark to assume that it won’t. Not by a long shot. And paying uncritical heed to conventional wisdom may not be a wise course of action.

Rays of the Dawn

And the Rays of the Dawn continue to rise over the horizon. We may not always recognize them as such, as they pass by lost in the noise of the news. I will call out in The Green Pen those that happen to catch my eye. If you see some that got past me, please let me know about them so that I may add them to this occasional series, Rays of the Dawn.
Posted by Mike (The Green Pen) at 4:06 PM

Email ThisBlogThis!Share to TwitterShare to FacebookShare to Pinterest
Labels: Rays of the Dawn