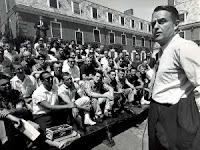 In the photo at left, Sargent Shriver talks to a group of potential Peace Corps Volunteers in 1961.

By exiting the Peace Corps when he did, Shriver set the precedent for a Peace Corps policy, still observed to this day, that staff members, from the director on down, would serve no more than five years with the agency. That way, there would always be fresh energy, fresh ideas, and no entrenched bureaucracy.

The Peace Corps posts a tribute to Shriver, telling the story of his seminal role in its founding and of his tenure as its first director.  The National Peace Corps Association, a nonprofit organization of former Peace Corps volunteers and staff and of other friends of Peace Corps, remembers Shriver, as well, including a biography and links to resources and reflections available on the internet.

Joby Taylor,  Director of the Shriver Peaceworker Fellows Program at the University of Maryland Baltimore County, in his “Remembrance of Sargent Shriver: A Twentieth Century Giant” in the Spring 2011 issue of Worldview, the magazine of the National Peace Corps Association, says of Shriver:


He imbued programs with the overarching idea that because service highlights our common humanity even as it solved real and pressing problems, it was a primary pathway to peace. Far from the common negative view of peace as the absence of conflict, Shriver exemplified a richly positive vision of peace whose key qualities included happiness, joy, and love. His natural skill as a social entrepreneur was to scale up these peacebuilding opportunities – to create service settings that called others to get engaged and realize this truth for themselves. “Serve, Serve, Serve” and “Shatter your mirrors!” he charged; and in response to the question of how we should begin, he said, “In a phrase, the cure is care. Caring for others is the practice of peace!