The Veil of Time: A Remebrance of Today

It's a funny thing about time and remembrances. Some say that the arrow of time is an illusion, that all is happening simultaneously in some multidimensional universe and that remembrances are leaks across the veil between them. For Marcel Proust, the taste of a small teacake, une petite madeleine, opened in the veil a floodgate of memories that then filled his seven-volume opus, A La Recherche du Temps Perdu. For me, today, it was an obituary that transported me suddenly through such a hole to six years ago to the day.

I was sitting in Starbuck's this afternoon nursing a soy latte while reading the current issue of The Week. And there it was -- an obituary for Andy Williams. He died two weeks ago at age 84 fighting bladder cancer. This was news to me as I'd been away at a spiritual retreat at the time and missed the reports of his passing. 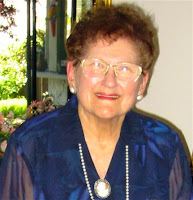 I read the obit, and suddenly it's October 8, 2006. I am collaborating with my brother Gary and sister Jeanine on writing an obituary for our mother Faye, who died yesterday at age 90 and is to be buried tomorrow at Mount Sinai Memorial Park in Los Angeles.

Two days ago, the day before Mom died, Sis, cousin Maia, niece Deborah, my daughter Unmi, and I (I hope I remember correctly who was there!) were gathered around her bed in her San Jose apartment, holding hands. Her favorite music was playing -- an Andy Williams CD. And we were all singing along with Andy. Mom, too, as best she could, even if sometimes only mouthing the words.

Shortly before 9:30 the next evening, "yesterday", a battery of birds fluttered noisily away from the bushes outside Mom's window. At the very same moment, in Tucson, Arizona, two small poodle puppies belonging to Graciela, my ex-wife and friend of nearly 40 years, went crazy barking and running wildly about the house as never before.